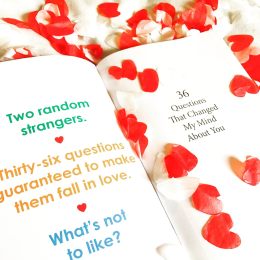 “Two random strangers. Thirty-six questions guaranteed to make them fall in love. What’s not to like?”

Based on a psychological theory, Grant’s novel explores the concept that love can be engineered by using thirty-six simple questions. Questions such as What would constitute a perfect day? or When did you last sing to yourself? To someone else? are designed to reveal the souls and characters of both participants, enabling them to form a deep connection with a stranger. In a modern world dominated by technology, this face to face interaction is performed to test whether genuine human interaction can give love a kick-start or will it leave them feeling vulnerable and reserved?

For different reasons, Hildy and Paul both decide to participate in an experiment that tests the 36 Questions theory. Hildy, clumsy and eccentric, signs up for the experiment as a distraction from her own life and responsibilities. When she discovers that the experiment is to try and create love she is fearful and hesitant about taking part, fearing rejection and embarrassment. However, Hildy is desperate to find the kind of love that exists within her books and forces herself to give the experiment a chance.

As if part of some nasty joke, PhD student, Jeff, couples Hildy with Paul. Paul appears as the stereotypical bad boy. The arrogant, smooth type who remain unscathed by any judgement or criticism they may receive from others. Paul participates in the experiment for the $40 he will receive by the end of it – completely unaware of what the experiment is and what the result is predicted to be.

With one participant seeking true love and the other seeking nothing but the cash reward, the experiment does not run as smoothly as we would have hoped. Hildy tries to give 100% and is at first fuelled by excitement. However, Paul wants to get the questions done as quickly as possible and the two soon end up arguing with each other. The match seems a complete disaster as Hildy and Paul could not be more opposite, yet, through their insults, the two seem to break each other’s barriers and begin to understand each other on a sweet, deep level.

As we follow them into troubled families, runaway children, tragic pasts and the care of a King Kong Puffer Fish, we see their friendship grow and blossom in to something more. Is it love? I’ll let you decide that for yourself. But as they reveal more and more of themselves, as each question passes, their connection grows stronger.

36 Questions That Changed My Mind About This Book would be a fair title. The beginning of the novel is quite weak. We are faced with the clumsy girl/mysterious boy stereotypes and nothing about the story seems to really grip you as you would hope. However, I urge you to read on. The novel is all about first impressions and how it is always important to learn more about someone; this is similar for the reader. When we first meet Hildy and Paul there is not much to fall in love with. Hildy is quite annoying and stubborn and Paul is an exaggeration of the moody teen, but that is just us making an initial judgement. Each question reveals more about their characters and what experiences have moulded them in to the people they are. We discover that Hildy is a very kind, insecure girl and are exposed to a much softer Paul who is altogether lost in life.

Throughout the duration of this novel I fell in love with these characters. I felt like I personally knew them and understood them, feeling the way the thirty-six question experiment intends you to feel. Grant’s style of romance is my favourite type. I have a huge soft spot for romances that begin as hate and slowly become the opposite; for this reason, I was hooked to the relationship and dialogue between Hildy and Paul.

My criticism for this novel must be that the plot is underwhelming. It does not seem to have much drive or purpose, only to get to the end of the thirty-six questions and see what the result is. The story of Hildy’s family issues and Paul’s harrowing past deserved more attention. These subplots had the potential to be extremely gripping and touching if they were visited more often and in more depth but unfortunately, they were not. Part of me wishes I could read on past the last page to see how all the characters went on and to receive some closure on these subplots. Maybe a sequel?

Due to the slightly underwhelming plot I could not give Grant’s novel more than 3 stars as it was just nice. I would highly recommend you read this book though, if just for the beautiful characterisation. You will find yourself thinking about these characters, specifically Hildy and Kong, long after the book has finished, wondering how their lives panned out. Grant has provided a beautiful and thought-provoking concept Could love have a formula? Read this book to find out.