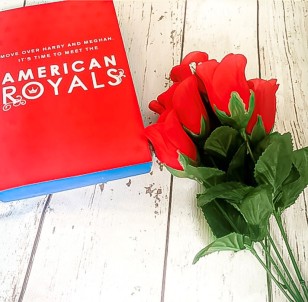 Two and a half centuries ago, America won the Revolutionary War and General George Washington was offered the crown. Today, the House of Washington still sit on the thrown with Princess Beatrice next in line. Beatrice’s whole life has been building up to her ruling the United States and the time for her reign is imminent.

Like most royal families, there is an heir and a spare. One raised to rule and another left to their own devices. In the House of Washington, however, there are two spares. Twins, Princess Samantha and Prince Jefferson, have lived in the shadow of their sister for as long as they can remember. As a result of this, Princess Samantha has become a rule breaker and doesn’t really care about anything – apart from the one boy she can’t have – and Prince Jefferson has become your ‘handsome prince’ stereotype. The pair have all the responsibilities of being royal but none of the power. If they were a generation older, Prince Jefferson would be heir to the throne but all he has to worry about now is the two girls fighting for his affections.

With Beatrice being the first female monarch, she is faced with overwhelming pressure and expectations are placed upon her; especially with a lot of men around her, convinced they could do better. Is Beatrice really the woman for the job? Can she keep her cool with a whole nation watching her every move? Throw in a schemer, a love interest and the general public and I’m sure we’re bound to find out.

After reading The Thousandth Floor by Katharine McGee, I was very excited to receive American Royals in the post. Although it’s completely different, I was not disappointed at all. McGee’s writing flows beautifully and it soon became an effortless read. I think it started quite strong but seemed to get better and better with each chapter. McGee’s characterisation was the reason for this as I became really invested in the lives of the characters and intrigued by what would happen next. Told from four different perspectives, it had potential to be very confusing but the characterisation and structure made it work and kept the reader engaged in the lives of these four characters.

I loved how each character has their own journey and arc throughout the novel. I especially loved Samantha’s as she realises her self-worth and no longer sees herself as the ‘spare’. Sibling rivalry and competition is something a lot of people can relate to and I don’t think it gets more difficult than your sister being the next ruling monarch.

As someone from the UK, I found it very reminiscent of British royalty and I was able to make connections between certain character and themes. The ‘rebel spare’ reminded me very much of Prince Harry who is renowned for his cheeky ways and rebellious behaviour particularly in comparison to his sensible brother, and future ruler, Prince William. In American Royals there is a new law put in place that disregards gender in terms of ‘in line to the throne’ has also been put in place in Britain.

The story touches upon the morality of paparazzi and how intrusive it can be. I felt really sorry for the characters just trying to live their lives but being watched everywhere they go. They had so much pressure on them to behave a certain way and if they made a mistake, the whole world was watching. This also reminded me of celebrity culture and how difficult their lives can be being in the public eye. I also thought of Princess Diana and how on the night she died she was fleeing paparazzi.

My favourite character was Princess Beatrice. I loved her embracing her role as the first female monarch of the United States and asserting her power over those who doubt her. I appreciated the perspective McGee provided and it helped me see people in the public eye, specifically royals, as real people with real feelings – something, I think, that is easily forgotten. Some of Beatrice’s decisions seemed to go against the feminist outlook on the novel but as the story developed, a lot of these decisions made sense.

The one thing I wasn’t too keen on was Nina’s character. Nina was supposed to be a quiet ‘commoner’ and best friend to Samantha. As a ‘commoner’ myself I just didn’t find her relatable.

Overall, I really enjoyed this book. For me it was The Crown meets Gossip Girl which was always going to be a fun combination. The structure, pace and characterisation made this an easy and very enjoyable read. The ending suggests there will be a sequel and I can’t wait!